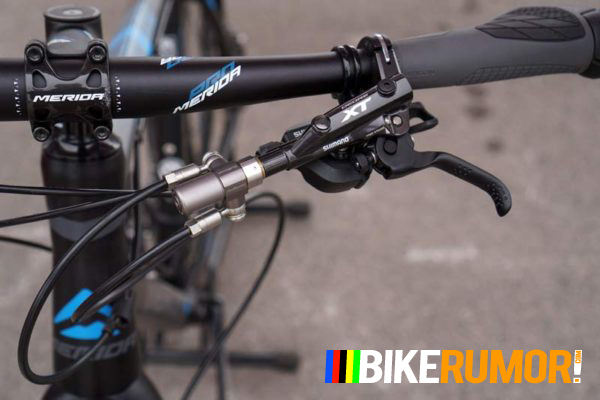 We first saw Outbraker’s power adjusting system at Interbike 2015, test riding it to see how it completely eliminates brake lock. It does it by effectively introducing a secondary master cylinder that lets you adjust where the flow cutoff is, which means it can apply power up to the point of full braking, but just before lock up. For commuters and newbies, that could mean just grabbing a handful of brakes and getting maximum stopping power with no skidding or loss of control. Now, they’ve got a dual system that controls both front and rear brakes with a single lever…

Curious about the technology? Check out last year’s coverage for a detailed explanation. The dual system splits the line, pushing fluid to both calipers with a slight bias toward the front brake.

If 1x is cleaning up the drivetrain and shifters, Outbraker’s dual system does the same for brakes.

Their demo setup shows the pressure directly in the brake line (left) compared to the actual pressure being pushed into the line (right).

Here’s what the they look like side by side, the dual version (left) and the single one (right). They can be installed directly behind the lever or anywhere inline. The angles of the hose exits have improved over the original version, getting rid of the L-bend and pointing the hose out from the lever in a straighter line.

Just for fun, they installed an XT caliper on an electric scooter, which made for some very wild demos.

This website uses cookies to improve your experience while you navigate through the website. Out of these cookies, the cookies that are categorized as necessary are stored on your browser as they are essential for the working of basic functionalities of the website. We also use third-party cookies that help us analyze and understand how you use this website. These cookies will be stored in your browser only with your consent. You also have the option to opt-out of these cookies. But opting out of some of these cookies may have an effect on your browsing experience.
Necessary Always Enabled
Necessary cookies are absolutely essential for the website to function properly. This category only includes cookies that ensures basic functionalities and security features of the website. These cookies do not store any personal information.
Non-necessary
Any cookies that may not be particularly necessary for the website to function and is used specifically to collect user personal data via analytics, ads, other embedded contents are termed as non-necessary cookies. It is mandatory to procure user consent prior to running these cookies on your website.
SAVE & ACCEPT
×
×

Item added to your cart

Continue Shopping Go To The Cart